Unite Union members working in fast food restaurants across Aotearoa have submitted and published a list of expectations and recommendations for safe operating at Level 2 and beyond.

Based on their frontline perspective, workers developed a list of best practice policy and procedures that will contribute to our collective fight against COVID-19. Despite the law saying that employers must consult with their workers on changes to health and safety practice, there has been no consultation with workers since the start of lockdown. 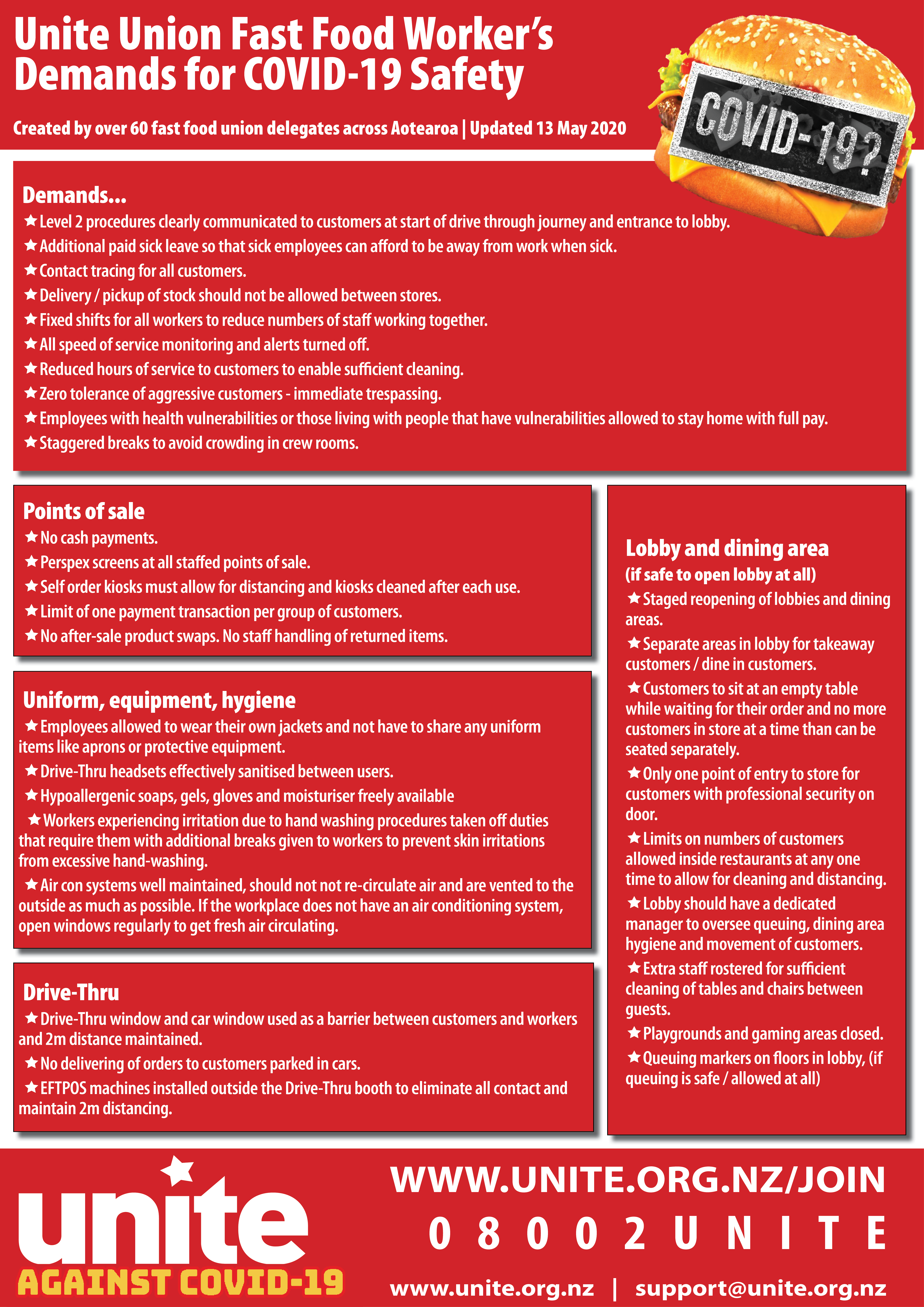 Workers expressed their frustration over company policy and procedures often being “just for show” during Level 3 with thousands of breaches occurring daily, especially social distancing inside kitchens and with customers at drive-throughs..

“Had McDonald’s, KFC, Pizza Hut, Carls Jr and Burger King listened to their crew in the first place, we would have had a compliant system from day dot meaning better safety for workers and customers. Instead we had practices that defied commonsense and put everyone at an unacceptable level of risk.” said Unite Union National Secretary Gerard Hehir

“If any customer or worker had Covid 19 in that first week of Level 3, any staff following the unsafe procedures could have become the virus’ next victims and the virus could have spread through restaurants like wildfire.”

As we seen in Australia at the moment, with 13 McDonalds restaurants closed due to infections, there is still significant risk. One of the worker recommendations is that deliveries between stores, the cause of most closures in Australia, is strictly limited.

“The revelation that MBIE recommended takeaways and deliveries should have operated at Level 4 in New Zealand during the lockdown is actually terrifying. That would have been an unmitigated disaster and shows why worker’s input is so vital. We doubt that anyone at MBIE who made that recommendation had any knowledge or experience working in a fast food kitchen on a Friday night.”

While there have been some improvements, particularly for drive through procedures, breaches are still continuing at level 2. Procedures are not in place to keep workers 1 metre apart from each other to the greatest extent possible, as required by law. Instead the procedures allow for 1 metre distancing only to the extent that it doesn’t harm profits. Workers have been reporting to us that distancing rules essentially go out the window when the restaurant is busy with orders

Clearly the employers had their say in both the Level 3 and Level 2 regulations, with the Prime Minister even specifically stating that the Level 2 rules had been “worked through with the Hospitality Association”. Great - but what about the workers who actually have to implement the rules and are most at risk if they aren’t followed? Despite workers putting their jobs on the line to speak out and successfully get necessary changes for Level 3, workers and their representatives were not consulted with about the Level 2 rules.

“Worksafe again failed to engage with the most important people when it comes to making workplaces safe - the actual workers.”

Unite is, however, very proud of the members who came up with their own solutions (developed in a series of video meetings with more than 60 union delegates) and spoke out publicly to get them implemented.

As originally recommended by the workers themselves, shelves appeared on McDonald's, KFC, Carl's Jr Drive Thru's after union members bravely spoke out explaining that every Drive Thru transaction at a KFC, McDonald's, Carl's Jr or Burger King resulted in a distancing breach, by design.

“We are now developing a follow-up survey which will be conducted across the industry in order to identify which restaurants are not following best practice as identified by the worker's themselves" said Gary Cranston, Fast Food Lead Organiser for Auckland and Northland.

With the spike in cases in Australia partly caused by an outbreak of the virus in a McDonald’s and Fast Food workers in the U.S. striking over safety, workers are asking customers to help them enforce their best practice expectations in order to avoid a return to Level 4, or worse.  In New Zealand, after the obvious failures at the start of Level 3, most Fast Food companies are being very cautious about re-opening table service inside, so there is an opportunity to make sure full re-opening is done safely and properly.

"This is why we have unions. This is what can be achieved. They didn’t want to listen and they haven’t changed their minds out of just a nice warm feeling inside. It’s because they wanted to cut every corner and we are not allowing it.” said a union delegate who contributed to the development of these most reasonable and sensible demands.”