Wendy’s workers from five stores in Auckland and Papakura walked off the job yesterday over the company’s theft of their right to “alternative days” off or “lieu days” for working on a public holiday. 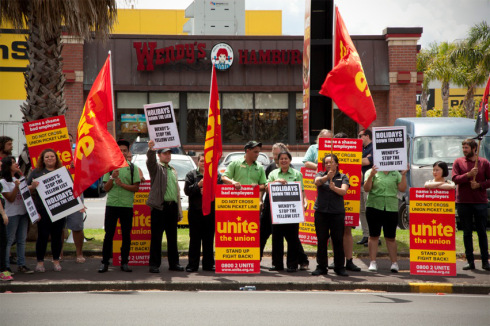 The workers were joined outside the Royal Oak store by two McDonald’s workers from the USA who are part of the campaign in Los Angeles for “$15 and hour and a Union“. Anggie Godoy, 19, and Genoby Jimes, 27, are in New Zealand to support Unite Union’s campaign against zero hour contracts in the fast food industry and will be attending a national fast food workers gathering in Auckland on February 14. Meetings are also planned in Wellington on February 11 and 12 with the Council of Trade Unions, members of parliament and union activists

The Wendy’s workers explained to media that the company operates what has been dubbed a “yellow list” to try and avoid their legal responsibility to give workers an alternative day. The worker’s say the company sometimes changes their roster just before a public holiday so they can pretend it is not what is legally defined as “an otherwise working day” which entitles the workers to a lieu day for working the public holiday.

Unite Union says that some employers think this type of theft is possible because of the existence of “zero hour contracts” in the fast food industry which don’t guarantee any particular number of hours or shifts on any particular days.

Unite Union maintains that manipulating a roster in this was is not lawful and are demanding that the company give workers an alternative holidays for every public holiday worked at Wendy’s as part of the claims in this year’s collective agreement negotiations.