It has come to my attention that central Auckland McDonald's Franchisee Prakash Hira has been requiring workers, including vulnerable migrant workers to sign illegal letters requiring them to pay his company $3,000 if they leave their job within 12 months of starting.

This is an example of one of these letters. 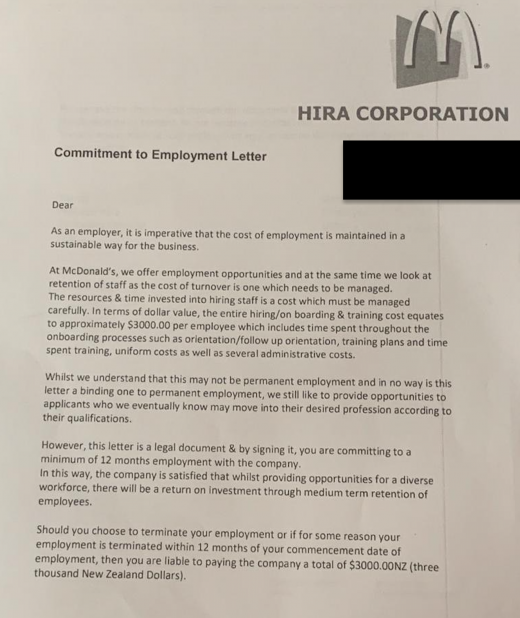 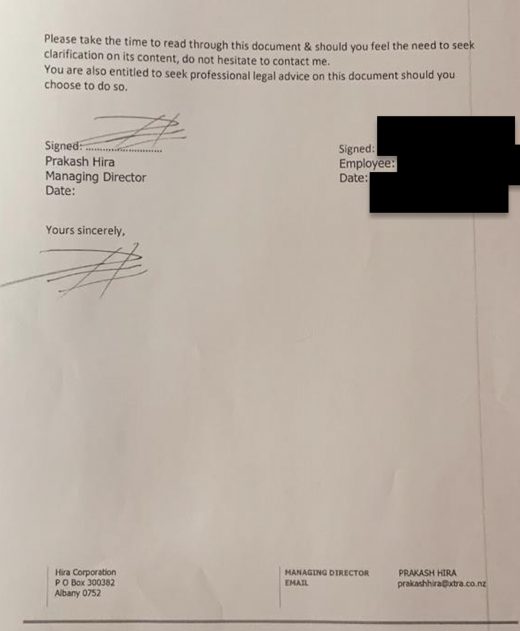 The letter explains that if a worker wants to resign within 12 months of starting their job then they will have to pay Hira's company $3000, no matter what the reason for leaving is, no matter how the worker may have been treated by the company. The worker who blew the whistle had recently resigned from their position, only to be sent a copy of the letter that they were compelled to sign as a condition of securing a job last year. The worker wasn't leaving because they wanted to, the worker told me that they were leaving because they felt they had been mistreated, overworked, verbally abused and denied access to sick leave at one stage.

Last year Hira tried to cut workers' hours by 20 percent after hiring 28 new staff, and giving them more hours of work without offering existing staff more hours first. This was also brought to the attention of Unite Union resulting in Hira backing down and cancelling the unlawful cuts.

Contrary to what the letter states this practice is completely illegal, immoral and cannot be enforced in any way whatsoever. It is in fact a form of what is known as Bonded, or Forced Labour, a practice defined by the International Labour Organisation as "all work or service which is exacted from any person under the threat of a penalty and for which the person has not offered himself or herself voluntarily." You can read more about that practice and international efforts by unions to eliminate it here.

Mr Hira's company owns and manages four McDonald's restaurants in central Auckland: Mid Queen Street, Britomart, Quay Street and Point Chevalier. I sent a letter to all Unite Union members saying: "Anybody who has signed one of these letters can rip it up and ignore it. Anybody who has paid so much as a dollar to Hira's company because of one of these letters can contact me to get their money back. Anybody who leaves their job and is not paid back all of their annual leave can contact me."

The alert and advice from Unite Union was then leaked to the media and the following story was published: McDonald’s investigates franchisee owner accused of bonded labour.

We only know about this letter because some union members were able to contact us and tell us about it. This is why it is important for workers to join unions so that workers can look out for one another and get independent advice when they need it.

If you work in fast foods and are outraged by this story, click here to join Unite to support our work