SkyCity workers have voted overwhelmingly for strike action to get SkyCity to  recognise that workers should be compensated for the unsociable hours they do so that the casino can rake in the cash at nights and weekends.

Almost 900 of the casinos employees are members of Unite Union, under the SEA-Unite banner  (SEA = SkyCity Employees Association) and voted 94% to reject the last offer and 97% for strike action at meetings last week. A strike notice has been issued for 5pm Saturday 31st August to 8am Sunday morning. Mediation is not available until Friday 6th September.

The main union claim is for penal rates at nights and weekends to reward and encourage staff who are willing and able to work these hours and, crucially, allow others some choice about their work hours.

The campaign is called “Back to the Weekend” to underline the rights of employees to be able to choose to spend more weekends with family and friends like most other workers.

“The basic problem is that SkyCity needs most of its workers at weekends and nights and makes most of its income during that time – but prefers to use the ‘stick’ rather than the ‘carrot’ to get staff at these times “ says lead negotiator and Unite National Secretary Gerard Hehir. 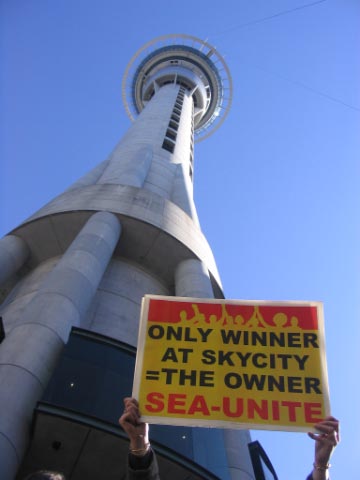 Almost all low paid workers are forced onto rotating rosters irrespective of their personal or family situation. The union has been trying to negotiate more humane rosters for years but SkyCity refuses any extra pay for nights and weekends.

“Apparently incentives are only for very highly paid executives at SkyCity”  said Mr Hehir *(see below for details of multi-million dollar incentive bonuses for the few at the casino).

“No-one disputes that there have to be shifts at weekends and nights. The issue is SkyCity should be encouraging staff who can choose to work those shifts – recognising that not all hours are equal .

The union has offered concessions on the claim but SkyCity has so far completely rejected any movement on the issue.

Skycity site Convenor Joe Carolan said:  “This year the union have fought three re-structures forcing workers to work the unpopular night and weekend shifts. Workers are sick of the stick and no carrot, especially since many remember weekend and night rates before politicians and companies took those away.

From nurses to bus drivers to teachers and retail workers, a new generation is ready to strike for their rights. If we win this at Skycity, we say to the Government - this is a right that all workers in New Zealand should have again.  It's time we undid the damage of the early 90s and bring back the weekend"

Penal rates are not unusual. Workers in 24/7 workplaces both in New Zealand and around the world get paid higher rates because it is the best and fairest way to make sure staff are available when you need them at nights, weekends and on public holidays.

SkyCity itself is well aware of this. They have around 1,000 staff at their Adelaide casino, many of whom will get time and a half, double time and even triple time on occasions for working unsociable hours. If it is good enough for their Australian employees why can’t their New Zealand employees in Auckland, who generate the vast bulk of income and profit, get at least part of that?

There is no question of being able to afford the cost according to the union:

“SkyCity made over $144 million in profit and only last week were boasting about having $450 million in the bank. Time to share.”

*(according the 2019 annual report CEO Graeme Stephens was given nearly $2.4 million  in short and long term incentives this year, as well as his $1.5 million salary package, while the top 86 executives shared another $4.6million in incentive payments in addition to their salaries).