The government has implemented a series of racist and elitist changes to immigration policy that is going to create huge hardship and hurt in the migrant communities for anyone who is not already very wealthy.

Immediately after being elected the government imposed a radical cut in the number of people being granted permanent residence. It went from 47,682 to 37,947 in one year from June 2017 to June 2018 and then was further cut to 34,992 for the September 2019 year - a ten year low. (See graph below) 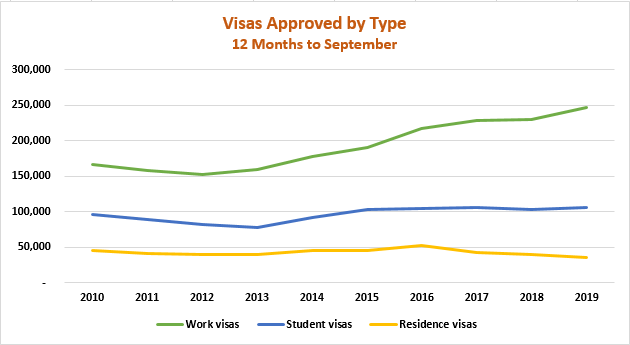 The government has also announced plans to continue the large-scale importation of "temporary" skilled and unskilled labour with little or no chance of transitioning to permanent residence.
Around 250,000 temporary visas with work rights are now being issued each year and a similar number of "temporary" workers are in New Zealand at any one time.  This is nearly 50% higher than the number in 2010. Entire industries are now dependent on workers on temporary visas. Thirty percent of all labour in the hotel and hospitality sector is now on temporary visas.
The "temporary" migrant labour system is designed to maintain a permanent pool of easily exploited labour. A recent government discussion paper to strengthen tools for the government to combat migrant worker exploitation will have no impact so long as the system stays the same.
Maintaining this system has meant that despite the three government parties criticising the fact there were "too many migrants" under the National government who were putting pressure on infrastructure and house prices, there has been only a small decline in the overall flow of people into New Zealand on a permanent or tong-term (one-year or more) basis.
This number, which includes the movement of New Zealand citizens and permanent residents as well as foreign students and temporary workers, has declined only modestly from 52,700 in 2017 to 48,300 in 2018. Media often refers to this number as the "Net Migration Gain" but is simply a net long-term flow number. The 2018 number is the difference between 145,800 arriving and 97,500 leaving. It has nothing to do with those coming permanently as permanent residents.
This net gain number is also actually only a net gain of around 1% of the population each year. It is simply wrong to blame migrants for any lack of planning done by the government to meet this modest increase.
New Zealand has also had a steady loss of New Zealand citizens or other permanent residents overseas. There has been an average net loss of 18,000 a year since 2001 - chiefly to Australia to get better wages. Several decades of net losses has meant that around one-quarter of the NZ-born population lives overseas. These have had to be replaced by encouraging skilled workers to come to NZ as permanent residents. the number of permanent residence visas issued has been around 40,000 a year for two decades, including when NZ First has been part of the government.
The temporary migrant worker number has grown continuously over the last few decades. We now have 100,000 overseas students paying fees and being used to subsidise both the public and private education sectors. Often they are ripped off by both. Most work part-time. NZ has also radically increased working holiday visas and both skilled and unskilled temporary work visas.
The fact that some of these workers could graduate towards permanent residency was used by employers, education providers and the government to get them to come to New Zealand.
Allowing permanent residents to bring other family members, including parents, was a necessary part of a remotely humane policy that treated these migrants as anything more than economic digits to be exploited as much as possible for a little cost as possible.
Migrants with permanent residence could also marry partners from their home countries if the relationship was deemed "genuine".
Worker and students hoping for permanent residence could bring partners and children to New Zealand while they worked and studied. "Temporary" visas could be renewed and many "temporary' migrant families have been stuck here for years in a "temporary" status because it has proven harder than they expected or been promised to transition to permanent residence.
Many of these "temporary" migrant families have made their lives here. Children have been born and know no other life than New Zealand. The fact their visas have been renewed again and again is proof that New Zealand needs them here and should honour the promises originally made and offer them permanent residence.
There are three broad categories of permanent migrants: Business/Skilled; International/Humanitarian; Family. For the last twenty years, NZ accepted around 25,000 in the skilled/business category, 3500 for international/Humanitarian and 15,000 for family (including about 5000 for parents). 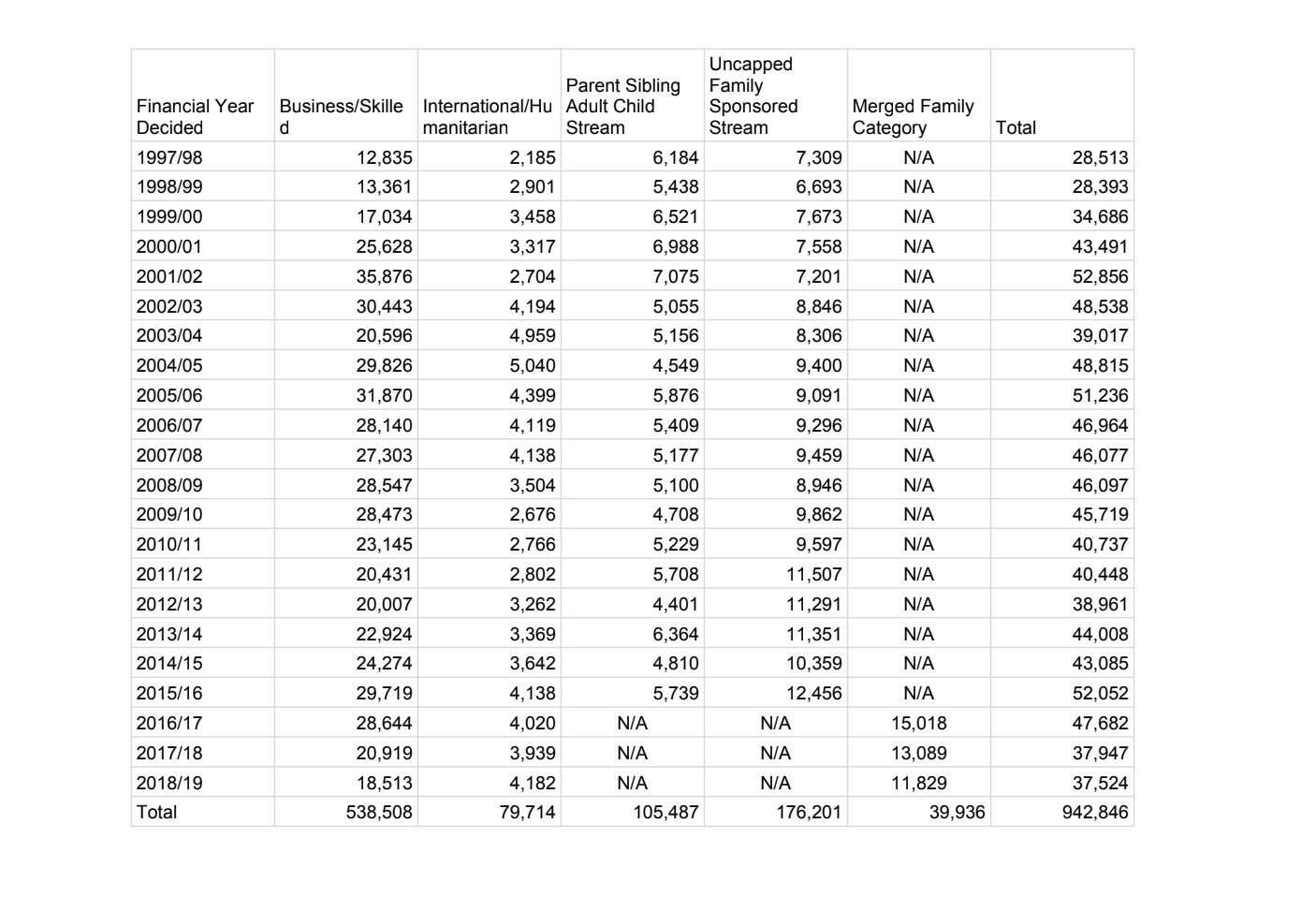 This was deemed a reasonable and humane balance. Immigration agents had a fair idea of what to expect in the different categories to help their clients.
However, over the last few years, there have been a series of harsh and sudden changes that have made migrants lives hell.
Firstly it was clear that the permanent residence number should have been increased to allow for those workers who had undertaken study, training and got jobs able to earn the points needed for permanent residence to suddenly have these criteria changed on them without warning to prevent them accessing permanent residence. This happened a few years ago for fast food managers whose category was eliminated by Immigration NZ while keeping many other far less skilled categories as pathways to residence.
Four years ago the National government suspended the parent category altogether. There had been some racist and anti-immigrant campaigns claiming the category was being abused by children abandoning their parents in NZ to claim National Superannuation. This was a lie. A scientific survey found less than 1% of parents could be deemed to be in that category.
But when Labour reinstated the category recently they did so for only 1000 per year and families have to have an income of $106,000 a year to qualify for one parent and $159,000 for two. Even for the few families who qualify there will be some cruel choices imposed on who to bring. The income threshold was $65,000 for one parent before 2016.
Working-class families who need mum or dad to help with the kids while they go to work are going to be the most hurt by this policy.  Many Chinese migrants are from one-child families and this will be an extremely painful imposition.
Last week it was revealed that Immigration New Zealand had secretly changed its policies for admitting partners of Indian migrants. Before this month it had been accepted that living together for two years as a criterion for a "genuine" partnership was not appropriate when many marriages were "arranged" marriages or the partners were not allowed to live together beforehand.
Forcing the new migrant to New Zealand to go home for two years to live with their partner before coming back was also not practical for those without a wealthy family to support them. Immigration NZ simply stopped accepting partnership residence visas for anyone who married in India then came back to work without telling them of the change in policy.
Criticism from the Indian community of this policy change was met with racists taunts for go home if you don't like it from NZ First MP and government minister Shane Jones.
These racist and elitist policy changes are going to continue so long as there is not a radical increase in the number of "temporary" visa holders being being granted permanent residence.
Cutting the permanent residence numbers is simply a perverse decision in the current circumstances when employers are screaming that they lack the skilled workers they need.
Cutting the overall permanent residence number by 20% to 2018 led to a 35% drop in the number of visas being given in the "Skilled Migrant/Business" category from 28,644 in the June 2017 year to 18,513 in the year to June 2019.
I suspect that Immigration NZ is trying to rescue the "Skilled" worker category by squeezing the the parents, spouse and family reunification categories as much as possible.
But now the "skilled" worker category is so small it is able to be filled by workers earning the new and radically higher thresholds of nearly $80,000. The government is actively recruiting teachers from overseas to fill the gaps in the current system and then telling them they will never qualify for permanent residence because the government will never be able to pay them wages to match the new much higher threshold required. It as if the different arms of the government don't even talk to each other.
The whole immigration system needs a radical overhaul.
A good start is put forward by the Migrant Workers Association
We demand:
1) a public apology from Shane Jones

3) offshore education agents should be regulated