Unite union members at McDonald's iconic 260 Queen Street restaurant are celebrating after having successfully defended their hours of work from unnecessary cutbacks.

The large 260 Queen Street location was the second McDonald's store to open in New Zealand in July 1977. You may have heard the news that the store is being closed, only to reopen in another location two doors down. 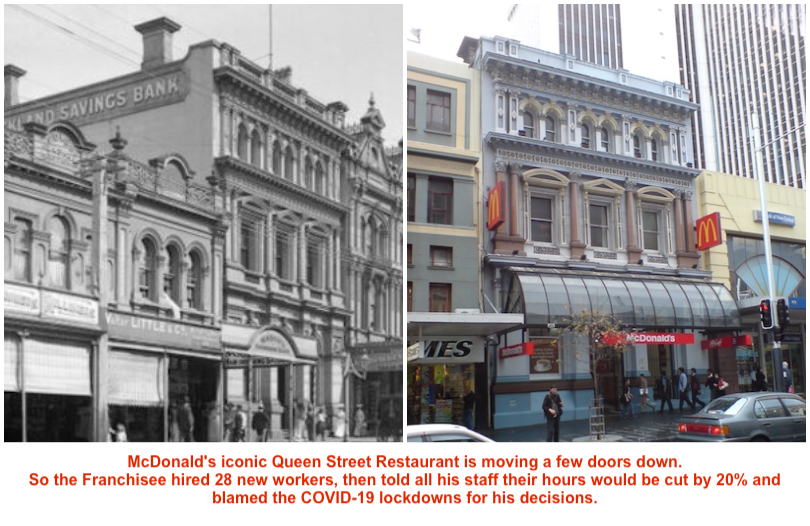 Despite existing staff crying out for more hours of work Franchisee Prakash Hira hired 28 new employees and gave them a total of 371 more hours of work without offering his existing staff more hours first. He then notified all the workers, including the new ones, that they will have their minimum hours cut by 20% in breach of their employment agreements. Prakash claimed that the cuts were necessary because "the restaurant has been impacted through the various COVID Alert Levels" and blamed power distribution company Vector for a delay in his new restaurant opening.

At a staff meeting held at the Queen Street store workers complained that they were already struggling to pay their bills because their hours were already too low. Prakash had tried to stop union officials taking part in the meeting. Unite officials attended the meeting anyway and explained to workers that their contracts had been breached by not being offered new hours and that Prakash could not legally cut their existing hours without their permission. Workers complained that he should not have hired more workers if sales were down and when sales were expected to rise he should have offered them more hours.

Following the intervention Prakash who owns the Queen Street, Brittomart, Point Chevalier and Quay Street restaurants then backtracked on plans to cut workers hours by 20%.

The latest collective agreement was negotiated and signed off under extraordinary circumstances during COVID-19 lockdowns and puts a focus on job security as we head into uncertain economic times. Unite negotiators were mindful that employers may wish to take advantage of perceived impacts on businesses to justify cutbacks so we prioritised claims that would improve job security for current employees.

Bizarrely, when explaining that he would no longer be cutting anyones hours (because that would be unlawful) Prakash went on to explain to employees that he expected sales to rise when his new restaurant opens on Queen Street "which in turn would mean a need to schedule more hours". Unite will be watching to see if these hours are offered to existing staff rather than new employees this time.

The 260 Queen St McDonald's will close when the new fast-food outlet at 268 Queen Street opens next week.