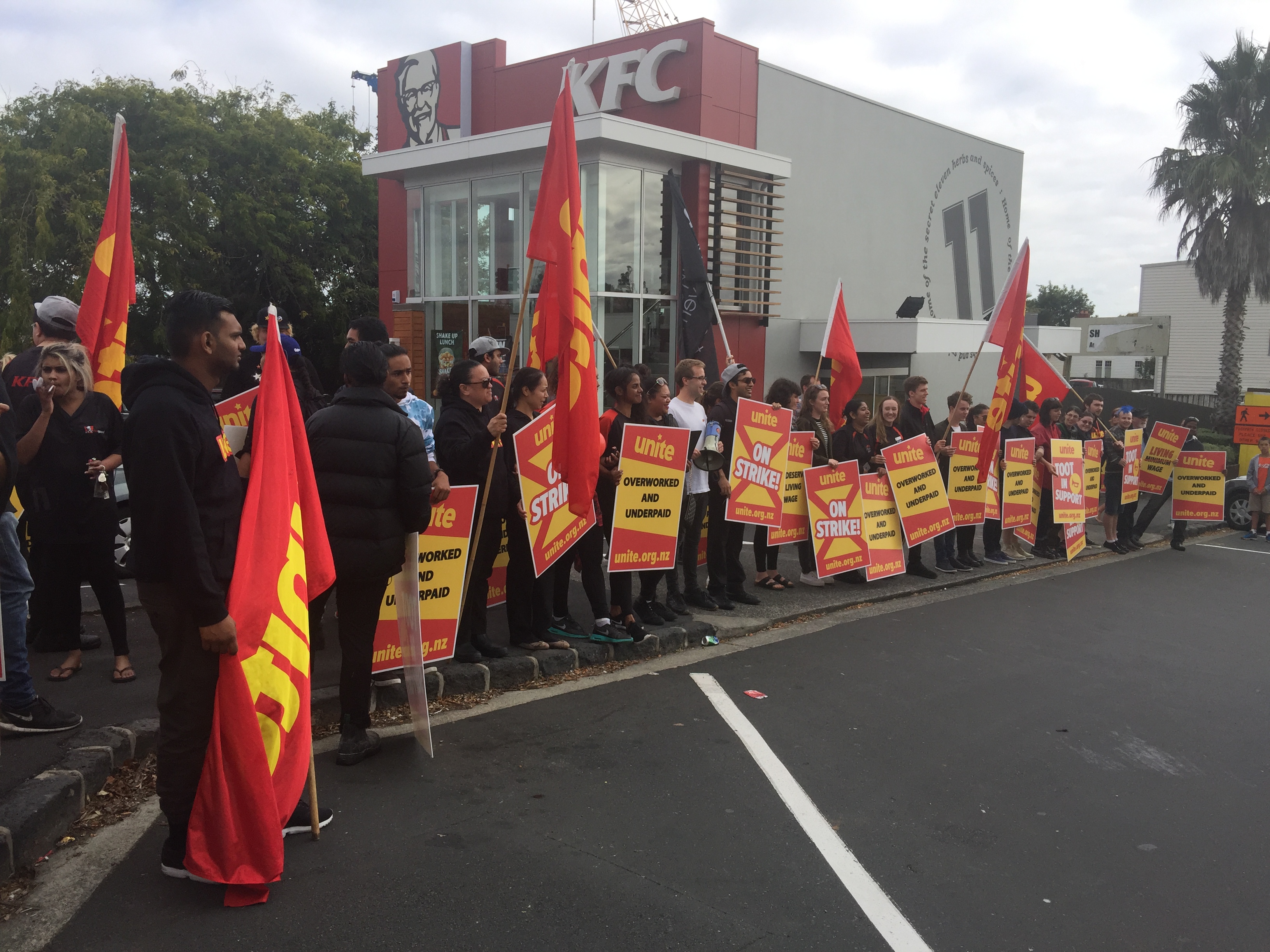 KFC is off the menu this weekend as hundreds of Fast Food workers employed by Restaurant Brands and members of Unite Union take strike action this weekend.

Over the past week, members have been voting on the latest offer as well as on a secret ballot to authorise strike action. 89% of the 763 who took part rejected the offer and 88% voted to take strike action and Unite Union sent RBL a notice this morning of a strike beginning at 2pm this afternoon and finishing at 2am on Monday morning.

Most of the margins have been cut in half in RBL’s last offer, with the qualified Pizza Hut “Expert” reduced to only 25 cents per hour above the starting rate, when it has been 80 cents.

“RBL has been forced to increase the starting rate by the minimum wage increase and to match the $18 start rate of major competitors like McDonald's - but they want their skilled and trained staff to pay the cost. Low wage employers need to realise that they can’t get away with just increasing their lowest rate only and undervaluing their experienced and skilled staff”.

Cuts to Overtime
RBL want to limit overtime to those who work more than 50 hours a week (currently 40) or more than 10 hours a day (currently 8). This would eliminate most time and a half pay for waged workers.

Salaried Store Managers joining the action
For the first time ever Salaried Assistant and Store Managers - half of whom belong to the union - are standing alongside their waged colleagues to take action.

“The last pay increase offer for salaried members was less than 3%. Many of them already find themselves working for a lower hourly rate than many of the waged staff they manage, despite having considerable extra responsibilities - managing staff, food production and a retail business. This offer actually makes the situation worse relative to waged employees”

Chronic staff shortages
The other major issue is chronic understaffing and RBL’s refusal to give managers authority to reduce services to ensure the health and safety of customers and staff.

“Rosters are already far too thin, but KFC managers regularly find themselves with 25 to 50% of their rostered crew unavailable for one reason or another. There have been numerous media reports of customers shocked and angry at long delays in service. We receive daily reports from stressed-out staff unable to take breaks, reeling from angry customers and unable to ensure the stores are clean and correct food preparation procedures are followed.”
https://www.stuff.co.nz/business/109837725/low-staff-numbers-and-a-pile-of-rubbish-leds-to-complaints-at-kfc-motueka
https://www.stuff.co.nz/business/80187690/lack-of-staff-at-kfc-blenheim-and-others-around-new-zealand-results-in-long-wait-times-for-fast-food
https://www.stuff.co.nz/life-style/food-wine/95094012/kfc-customer-disgusted-at-state-of-restaurant

The Union simply asked that shift managers have the authority to reduce services such as drive-through or online orders when they have run out of options to find replacement staff. Area Managers should also put in writing their reasons for refusing a request to reduce services. RBL won’t agree to either proposal.

Look after current employees first
The union’s position is that all vacant shifts should be offered to existing staff before new hires. The union has offered more flexibility around covering temporary vacancies but permanent vacancies need to be offered to existing staff first. All RBL’s major competitors do this but RBL continues to hire new staff with only one or two guaranteed shifts rather than offer those shifts to willing and able current staff wanting to build a decent and reliable income.

"Why shouldn’t workers who are willing and able to work more hours get offered them first? It ’s the fastest way to fill vacancies with skilled workers and it is simply common sense and fair."

Shorter breaks? Hell No!!
Because the law has changed to make breaks compulsory, Restaurant Brands wants to cut paid breaks from 15 minutes to 10 minutes only. Union members are very clear on their response: “Hell No!”

Hundreds of millions for shareholders - what about the workers?
Restaurant Brands made over $36 million last year. Shareholders have recently been paid $881 million by the new owners for a 75% stake. RBL easily can afford to pay their frontline employees a decent increase and increase paid hours for the sake of their staff and customers.