Hoyts cinemas have threatened their workers that if they take even 1 minute of strike action, they will be locked out of the workplace for almost a month.

The threat comes after union members rejected a 3-year offer that would have seen all staff who are not on base rates that automatically move with the minimum wage forced back towards the minimum wage.

Hoyts have said they will take the draconian step of locking out workers until 26 July even for a "partial strike" like not selling popcorn or workers having their breaks together.

"This is a declaration of war" says Unite Union National Director Mike Treen.

"It became very clear during bargaining that the lockout threat was an instruction from Australia where Hoyt's head office is based. Hoyts Australia is in turn owned by the Wanda group based in China, the worlds largest cinema chain operator who bought the Australian company for a billion dollars just three years ago.

"Hoyts Australia sent a representative to the first rounds of bargaining but boycotted the two mediated bargaining sessions held in the last month.

"We were left in the ridiculous position where the New Zealand team would have to call Australia for instructions whenever solutions to the deadlock were being discussed. Ultimately, the person on the other end of the line refused all compromises. It's like they don't take their NZ operations seriously.

"Hoyts Australia has been plagued by scandal in recent months."

"The company was giving credits to cinema-goers for an online betting account which wasn't requested when cinema tickets were bought. Hoyts Chief Executive Damian Keogh was caught by police flushing cocaine down a restaurant toilet after a day-long liquid lunch but kept his job. (See media links below with video of police bust)

"We wonder if there is a culture of greed and excess at Hoyts and they are wanting to make workers in this country pay for that greed.

"Their claims during bargaining included reintroducing youth rates, stopping the deduction of union fees, and a three-year deal with compressed margins for skill and service in years two and three.

"They want to keep staff who are currently paid above the starting rate to a two or three per cent a year increases when the minimum wage will be increasing by 6 or 7 per cent a year.

"The union has fought hard for years to ensure that workers are able to move off the minimum wage based on their skill and experience.

"When the minimum wage increases we have to be able to maintain those margins for skill and service or we will end up with workers effectively being pushed back on to the minimum wage.

"The company already pays significantly less for supervisors and managers than does Event Cinemas, their main competitor. This difference is already around $2 an hour for most Duty Managers.

"This offer would further undermine margins for skill and service by giving those above the base crew rates only half the increase expected over the next two years for the base rate workers as a consequence of the planned minimum wage increases.

"All the other major employers Unite deal with in the fast food industries and at Event Cinemas have agreed to maintain the margins for skill and service in return for multi-year agreements.

"Why can't Hoyts Cinemas do the same?

Unite Union is calling on all supporters of workers rights and to start boycotting Hoyts Cinemas and email your concerns directly to Hoyts Australia negotiator, Jodi Paton at jpaton@hoyts.com.au

"We want to deliver a powerful message to corporate bullies that they are not welcome here," said Mike Treen. 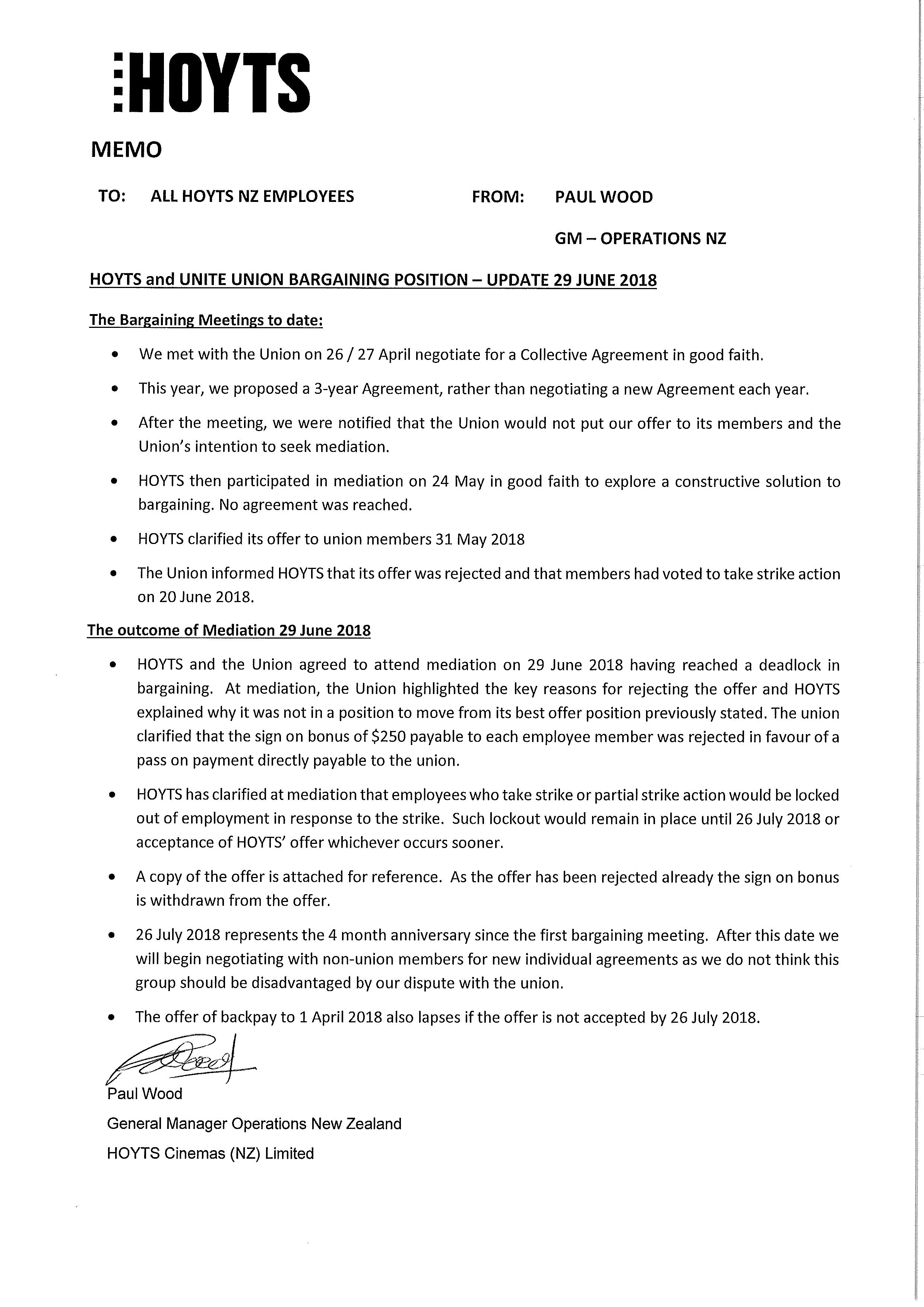