This week I have learnt that at least four Chinese construction workers who came to New Zealand under false pretenses in mid-2018 are being refused an extension of their visas.

These workers were part of a broader group we have represented over the past year who did everything that was asked of them by Immigration NZ when that government agency wanted their help to investigate possible fraud.

These workers had spent $40,000 in agency fees in China to get the job offer and visa originally. They were lied to about what they would earn and how long they could stay. It is simply impossible to earn enough in New Zealand with the one or two-year visas they were given to pay that investment off and then save some more. 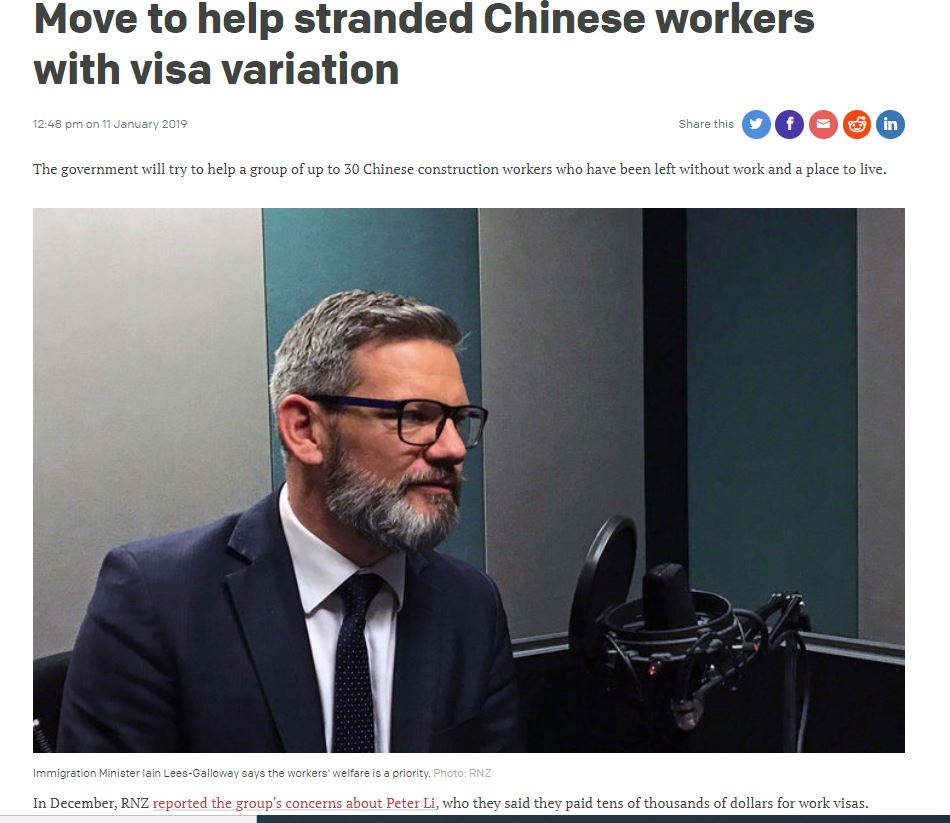 When I went public about their plight I was told by the Immigration Minister Iain Lees-Galloway that he would ensure they could change their employer and get new visas.
See: Move to help stranded Chinese workers with visa variation
See also Immigration Minister Iain Lees-Galloway promises alternative visas for Chinese workers
These promises were not fulfilled.
The only visa extensions have been for about half of the group who are being asked to stay and give evidence if needed in a possible Immigration fraud trial.
We were also able to pressure INZ to allow extensions for a possible Employment Relations Authority hearing that Unite Union was taking for the workers which was scheduled to be held in November. However, that case has been settled without the need for a hearing.
The workers on one-year visas who had brought that case and were not asked to give evidence in the INZ investigation are now being asked to leave without the chance to recoup the exorbitant fees they had to pay in China. Where is the humanity?
This week I have also been trying to ensure the partner of a Chinese construction worker killed on the job in Auckland can access her probable ACC entitlements.
Again, there is no government agency that is there to help people in these extraordinary circumstances. The worker's wife had to fly here and make her own arrangements. She could not even find out the name of the actual employer that may have been responsible for killing her husband. When I asked Worksafe, the agency investigating the death for the name of the employer, they said I had to make an official request. I am still waiting for an answer.
Where is the government agency that can help workers?
The government agency actually responsible for enforcing minimum standards is The Ministry of Business, Innovation and Enterprise (MBIE). But Immigration NZ is part of MBIE and seems to have different priorities. They treat all migrant workers as potential fraudsters who need to be stopped rather than people that need help.
New Zealand currently has a quarter of a million workers on temporary work visas. The system is almost designed to allow exploitation. Very few of these workers will have access to a union. We need a special agency, independent of Immigration NZ, which is dedicated to enforcing their rights, rather than just prosecuting the occasional really bad employer