Unite Union National Secretary and lead negotiator Gerard Hehir says the members have had enough, with over 92% voting to take strike action.

“They are sick of having some of the lowest pay rates amongst major fast food companies, sick of working unpaid hours, sick of not getting their breaks and sick of Burger King not sticking to agreements.”

“We were disgusted to find salaried managers, who supervise staff and manage stores on their own, sometimes working for less than the minimum wage. They are routinely expected to not take breaks and to work extra hours without pay or time off. When your hourly rate is just $16.88 - only 34 cents above the minimum wage, you only have to work around one hour unpaid a week to go below the minimum wage.”

Because of these issues Unite has included BK salaried managers in negotiations for the first time and has a case before the Employment Authority for a former salaried manager who ended up in just that situation. Unite has been asking for weeks for clock-in/out time records for all salaried members. Burger King has refused to provide them, denying they exist despite having supplied such information on an individual basis previously.

“This confirms our fears that minimum wage breaches amongst managers has been widespread. Because it involves minimum standards we have now asked the Labour Inspectorate to investigate. It is no surprise that many salaried managers are migrant workers. Pay rates are only effective if you actually get paid for all your work. Burger King needs to wake up - the days of employers getting away with stealing their workers time and wages are over.”

Other significant issues union members are striking over:

Missed Breaks
This is a big problem at BK and important for the health and safety of workers. BK  have offered compensation (as they have to in law anyway) but that should be the last resort - they need to do everything they can to make sure the breaks happen. They refuse to record when extra pay is a result of missed breaks. You can’t fix a problem if you don’t even know when, and how often, it is happening.

Decent Pay for skilled waged staff
BK wage rates are amongst the lowest of the major food companies. They are offering a margin of only 2 cents per hour for skilled Crew Trainers and Maintenance staff. Workers simply want the same rates as other major fast food company workers.

Decent Hours
Unite has spent over two years trying to get BK to honour our last agreement on hours which was supposed to end “zero hour”  rosters. We have agreement on improvements but BK refuses to ensure the union is consulted as the changes are rolled out. Members simply do not have any confidence that BK will properly implement the new roster system unless their union is involved at each step.

Breaks Between Shifts
BK thinks their workers can travel home from work, feed and clean themselves, get 8 hours sleep and then get fed, dressed and travel to work again - all in 9 hours. As rents go up in bigger cities many members are forced to live further and further from their work. Forcing them to be back at work only 9 hours later is not only anti-social, but a threat to their health and safety.

Health and Safety reporting
We have more Health and Safety issues raised by Burger King members than any other employer we deal with. Our simple request, which almost all other employers have in place, is a system which allows workers to formally report H&S incidents without having to go through their manager (who is often the cause of the problem in the first place). BK’s response: an email address and answerphone that no members we asked had ever heard of and with no process to make sure incidents are followed up. 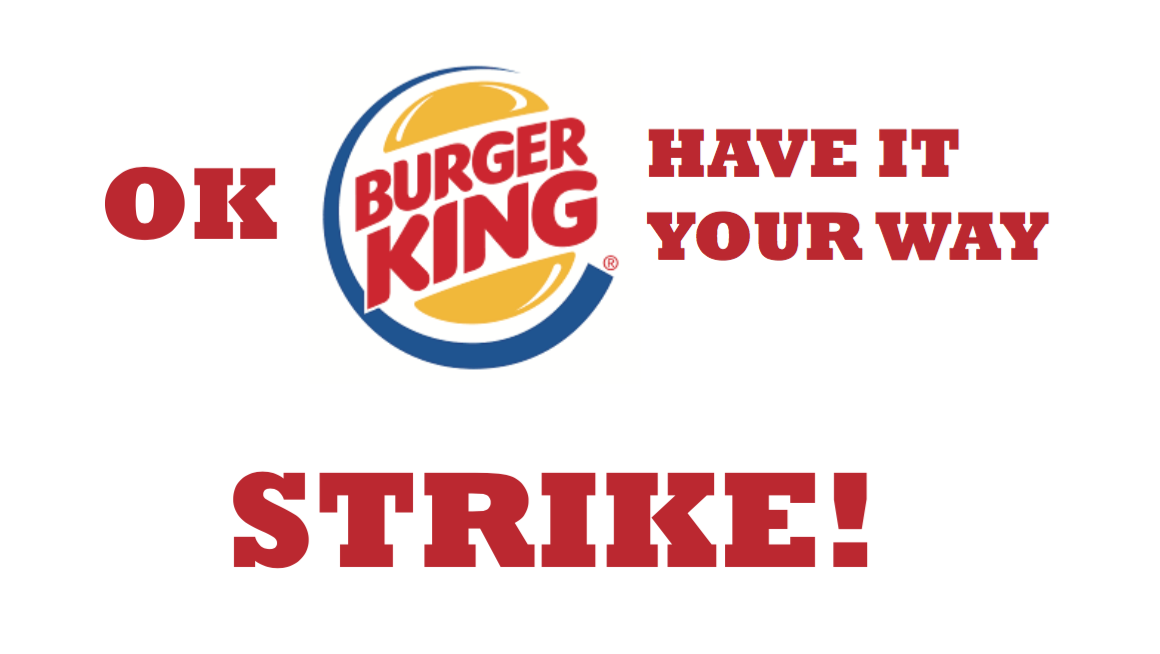 WTF?
BK even refuses to number the clauses in the Collective Agreement to make it easy to read. Go figure.

Burger King was asked to provide a full offer to put to members in May. That was resoundingly rejected and members voted by over 90% to authorise strike action. Since then Unite has been trying to get BK to mediation to resolve the issues. They finally confirmed availability and attendance for today (Thursday 14th June), but then pulled out yesterday.