To help workers who have seen their pay cut to 80% and whose employer has applied for the wage subsidy Unite Union has developed an online calculator at  https://info.unite.org.nz/covid-calculator. With just the average weekly income and regular weekly hours a worker should be able to calculate what gross pay (before tax and other deductions) they should receive. 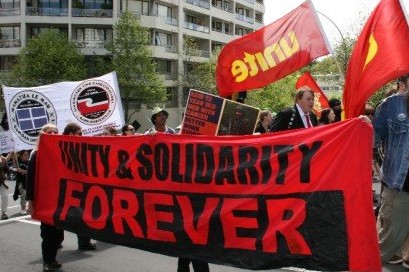 “We have had a large number of enquiries from both union members and non-members about their pay and so we created this calculator to assist” said National Secretary Gerard Hehir.
“There are a number of different calculations required depending on regular hours of work, weekly pay rate and the level of the subsidy that applies. The calculator simplifies these calculations and should help workers to see if their employer is adhering to the wage subsidy rules.”
“Employers are also encouraged to use it to check that their payroll system is getting it right. As we know from the massive debacle over holiday pay, payroll staff and providers can, and do, get it wrong. Employers must not only meet their responsibilities under employment laws, but also the specific requirements of the wage subsidy scheme as well”.
Unite has also adapted a flowchart developed by the Community Law Centre into an online questionnaire which lets workers figure out what their work and pay situation is under the lockdown : https://info.unite.org.nz/clc-questionnaire
“There are major problems with employers simply telling workers their pay and hours have been cut. That is not legal. The laws of the country have not been altered and any employer who changes the pay and conditions of their employees without consultation and agreement is in breach of employment laws and their contractual obligations. It is that simple.”
"Unite’s position has always been that employers should pay 100% of normal wages. While many employers may be able to justify restructuring and changes, we’re not aware of any who have gone through a lawful restructure process to reduce hours or pay”.
Some of the common problems workers are having:
1. Their pay being cut to 80% or  the subsidy level (and even less in some cases) without any consultation or agreement.
2. No justification or evidence provided as to why a pay cut is required.
3. Their average hours being calculated at less than their minimum guaranteed hours (the subsidy scheme requires at least average hours and most employment agreements have minimum guaranteed hours. Wages should be paid at the higher of the two.
4. Being paid 80% of their normal pay even though the subsidy received by their employer is more (all of the subsidy for that employee must be used to pay up to 100% of their normal pay before the excess can be used to subsidise other employee wages).
5. Workers being forced to take paid leave while their employer claims the subsidy (this is specifically prohibited in the wage subsidy conditions) and in most cases the requirement to take leave has been unlawful.
Unite is asking the government to release more information on employers who have been paid the subsidy.
“The search function is a good start, but to be sure of finding the right employer users need to be able to search by the NZ Business Numbers. Additionally, a full list needs to be available for download so that unions and media can get an overview”.
The government also needs to quickly address a huge hole in the Covid19 support system for workers.
“There are hundreds of thousands* of visa workers who have, or are likely to, lose their jobs or much of their income. We have come across many in the hospitality sector who are in a desperate situation. Both the Prime Minister and the Deputy Prime Minister have asked Australia to extend benefits to Kiwis living there who lose their jobs due to Covid19. As many have pointed out, we have a huge group of workers in new Zealand in exactly the same situation, so we need to practice what we preach.”
“The wage subsidy scheme, despite a few problems, has been a huge success so far in saving jobs and making sure workers don’t suffer during this crisis. In this crisis we need to extend that principle to all workers on our shores, regardless of their passport”.
*As at August 2019 there were 193,311 on work visas and 84,552 on Student visas
ends
Contact: Gerard Hehir 02102940345